Over the summer there were a slew of announcements about the need to get fit in middle age to ward off major illness when older – aimed at those in their 40s, 50s and 60s.  A key part of the recommendation is to get a bit more exercise into daily life. But how do you remain motivated?  Active 10 is a new app launched with all these announcements, so I thought I’d take a look at it and compare it with an activity monitor from Fitbit.

No one sets out to become unfit – it’s something you suddenly realise you’ve become when you find yourself out of breath. We all have busy lives, and there are just too many important things to do every minute of the day.  Unfortunately, lack of fitness in middle age has consequences in later life: increased heart problems, diabetes, the list of debilitating conditions goes on.  For many (including me!) the gym is not an attractive destination, but the good news is that Public Health England (who issued all the warnings) also say that 10 minutes of moderate exercise such as a brisk walk is enough to start making a difference. Now that doesn’t sound nearly as intimidating as the gym, so I thought I’d give their app a try – like over 100,000 people before me. 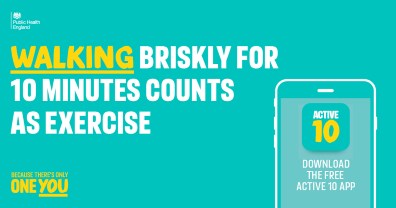 Active 10 is a smartphone app, and is free from the Apple and Google stores.  Using the phone’s location service to work out how fast you are moving, it classes more than 3 miles an hour as a ‘brisk’ walk, and a sustained 10-minute brisk walk is counted as an ‘Active 10’.  The app encourages you to set a goal of 1 or more each day.  Bear in mind that 10 minutes a day is just for starters, as the recommended amount of moderate exercise is 150 minutes per week, ie two a day with an extra one at some point.

For me the installation was easy and the app accurately records when I was active outside.  The home screen shows progre 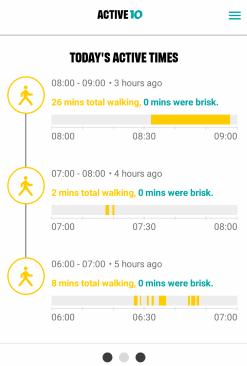 ss against today’s goals –  swiping left shows today’s activity in detail hour by hour, and another swipe shows a summary for the last 7 and last 30 days.  It awards badges for the first Active 10 and then for 7 consecutive days.  All good, except that over the last 7 days I have yet to record a single active 10 despite really trying.  Looking at the reviews on the app stores, others have reported similar issues on Android; the Apple version seems to work better.  It seems that different phones work slightly differently and that can mess up the activity recording. This is a shame, as when it does work reviewers say it helps them.

To check that my experience wasn’t because I had unwittingly turned into a tortoise, I also got on my bike and tested it out.  Again, it shows when I am active, but even when I could feel my heart pumping going into a headwind I was disappointed to find it only recorded a minute or two of brisk exercise.  Another downside is that it has significantly reduced my phone’s battery life – even if I switch location off when not using teh app it still hogs power.  That said, the developers are actively responding to users’ comments and are releasing new versions, so it is something I will return to.

Fitbit have been making fitness trackers for years.  For the last 9 months my wife [long-suffering editor of my blog, truly indispensable miracle-worker and genius, Ed] has been using a Charge 2, which is not free and requires you to wear a wristwatch-like gadget, so this isn’t a direct comparison – but if Active 10 doesn’t work for you, it is an alternative.

The Charge 2 records both steps and heart rate directly and can automatically recognise other forms of exercise, including running, cycling, aerobic workouts and sports such as football and basketball. Similar to Active 10, it doesn’t regard anything less than 10 continuous minutes of any of these activities as exercise actually worth logging, so you have to put some effort in! It will also track your route and record your distance, if you switch on your phone’s location and carry it with you. It even records sleep patterns – another factor in long term wellbeing – if worn at night.  The information is then synced via Bluetooth to your phone and can be seen in numerous charts on your phone or computer.  It works unobtrusively and reliably and the gadget itself has proved robust and only needs charging once a week, so it is much higher cost but lower maintenance than Active 10.

According to Public Health England who produce Active 10:

Research shows that rather than the number of steps taken or distance walked, it’s the combination of the intensity of the exercise and how long you’re doing it for that leads to the health benefits.

As well as providing a cumulative total of steps through each day Fitbit also encourages exercise periods of 10 minutes or longer and consecutive days of exercise which can really help keep track of fitness goals.  This was illustrated vividly on How to Stay Young  where one participant, Jennifer Tutty, used a fitness tracker to boost the amount of exercise from 49 minutes per week to over 600 per week by cycling to work and going to the gym. The exercise, combined with techniques to improve her sleep quality, reduced her body age by 14 years in 3 months.  According to Prof Mike Trenell of Newcastle University   “these will leave a legacy of good health and ageing well”

It is also worth noting that Fitbit and other trackers do not claim to be highly accurate. Everybody walks slightly differently, and my wife christened hers the Knitbit after it logged thousands of steps during an evening of knitting in front of the TV, so it is good but not perfect.  Fitbit does however show you relative performance from day to day and along with the motivational messages, reassuring buzzes and the charts for detail it does, in our experience, boost motivation and has increased activity levels in a fun way.

No matter how old you are now, it is clear that more activity helps our bodies and minds as we age further.  However, it is long term change rather than a short-term fad that makes the difference and both Active 10 and Fitbit can help keep activity levels up by showing what we are doing and rewarding our efforts.

As a starting point, I would definitely recommend giving Active 10 a try, especially if you have an Apple phone or a fairly new Android.  It covers the basics of recording activity with simple goals and some charts for interest and is being actively improved.  If Active 10 doesn’t work on your phone, you cannot live with the reduced battery life, or it’s just too basic for your needs, a fitness tracker like a Fitbit will probably be cheaper than a phone upgrade, is hassle free and provides a very rich set of features to cover activity, sleep and (on some models) diet recording.  The publicity around Active 10 has certainly made me realise that a series of very short bursts of activity isn’t going to make much difference but moderate activity sustained for 10 minutes several times a week can make a big impact.  Give it a try and use the comments below to let me know what works for you.